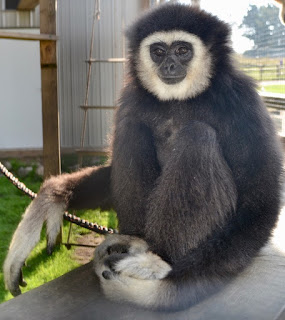 Gibbons are members of the family Hylobatidae and though they are apes, they are known as lesser, or small, apes. The Species name:  Northern White-Cheeked Gibbon (Nomascus leucogenys).  They are found in very small regions of Vietnam, Laos and China, although it hasn’t been seen in China since 1990.  The only known viable population 130 groups totaling about 455 gibbons living near the border of Vietnam and Laos.

These arboreal lesser apes evolved for life in the trees.  But when people cut those trees down the gibbons had nowhere left to go.

The International Union for Conservation of Nature (IUCN) Red list status is critically endangered.  Their numbers have declined by 80 percent or more over the past 45 years, primarily due to habitat loss and poaching.

White-Cheeked gibbon’s appearance varies by age and sex.  All infants are a beige color but by the time they are a year to a year and a half old, their coats have become black with white cheek patches.  At sexual maturity (five to seven years), males remain black and females turn a beige color again. Adult gibbon are 18 to 25 inches tall and weigh about 15 to 20 pounds. 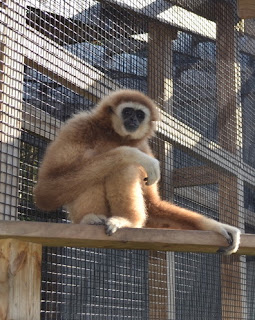 The adult female leads the hierarchy, followed by her female and male offspring, respectively, with the adult male coming in last.  Gibbons have an arboreal lifestyle and live primarily in forest canopies.  They are diurnal meaning they are most active during the day and sleep in the night.

Gibbons eat mostly fruits about 65 percent of their diet and 35 percent consists of leaves.  At Wildwood Wildlife Park, the gibbons are fed a mixture of fruits and vegetables, primate biscuits and leaf-eater biscuits.

The female has a gestation period of several months, after which a single offspring is born.  The baby clings to its mother from birth up to about 2 years of age after which it is weaned.  Both parents take care of the infant.  The young become independent when they are 3 years old, and sexually mature at 6 years old.

Gibbons are territorial and mark their zones throughout the day with vocalizations.   Defense takes the form of calls. Vocalization is a major social investment.  The basic pattern is an introductory sequence where both males and females “warm-up.” Calls are often accompanied by behavioral acrobatics.

To strengthen the bond between them, male and female gibbons perform a sort of duet.  When the female starts off a tune in an increasing pitch, followed by the male who joins in, and this can last between 5 to 17 minutes.  Males can make booming calls because of their gular sacs.

As a Zoological Association of American accredited facility we are involved in many reintroduction programs, rescue and rehabilitation work.  Sadly, modern-day conservation of threatened or endangered species cannot simply be limited to protecting or reintroducing animals in their native ranges.  For many, the “wild” is disappearing as humans encroach on their natural habitats. To ensure a species’ long-term survival, captive propagation of wildlife has become an essential part of the conversation and the only insulation against a potential collapse of wild populations. Our managed breeding program at Zoological Association of American is named the Animal Management Program (AMP).  Through the AMP our members are involved in the Gibbon Conservation Program.

Posted by Wildwood Wildlife Park at 10:54 AM 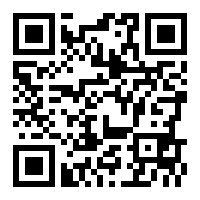